What links two survivors of the Titanic disaster, a shipping company heir and the Rolling Stones?

They are all past residents of Villa Nellcôte in Villefranche-sur-Mer.

In the late 1890’s, a banker named Eugène Thomas, restored an old military base overlooking the bay of Villefranche.

Named Château Amicitia – which means friendship in Latin – the 16-room Belle Époque mansion was purchased in the early 1900’s by Count Ernst de Brulatour, the first secretary of the American Embassy in France.

Twelve years later, the property was bought by Samuel L. Goldenberg and his wife Nella who were survivors of the Titanic disaster.

Mr Goldenberg was an international dog show judge and discovered a dog in France which he named Nellcote Gamin who became the modern descendant for the French Bulldog breed.

Their first-class voyage on the ill-fated Titanic was due to an invitation to judge a dog show abroad.

They had a house in the United States called Nelly’s Cottage and renamed the French mansion ‘Villa Nellcôte’.

The Goldenberg’s did not own Villa Nellcôte for long, and the house was then purchased in 1921 by Alexandre Bordes, who was one of the sons of a shipping company magnate.

The Bordes family were very generous to charities, and to perpetuate their legacy the road leading to the mansion was renamed Avenue Louise Bordes, after his wife.

Why the Rolling Stones came to live in southern France

In 1971, the Rolling Stones decided to go into exile in France to avoid huge taxes and having their assets seized by the British government, and it was at Villa Nellcôte that Keith Richards made a base for himself, Anita Pallenberg and their son, Marlon.

The Rolling Stones set up a mobile recording studio at Villa Nellcôte, and here in a basement room they recorded much of their album ‘Exile on Main St’.

A palatial mansion with a lengthy past

It is rumoured that the Rolling Stones chose Villa Nellcôte due to it being a large secure property to stop prying eyes, and it’s dark history of being a Gestapo interrogation centre in World War Two.

The house certainly lived up to a rock and roll lifestyle – there were many parties with known celebrities and unlikely hanger-ons, the villa was burgled of guitars supposedly for money owed to drug barons, and they held bourbon-fuelled recording sessions.

Today, you can no longer get a good view of the property, but if you want to visit Villa Nellcôte, it’s relatively easy to find.

Here are my directions below to find Villa Nellcôte:

1. From Villefranche-sur-Mer Old Town, walk towards the train station and follow Promenade des Marinières to the right heading away from the town.

At the end of Promenade des Marinières, you will see a set of stairs by the blue pay-parking machine leading up to Avenue Louise Bordes.  See photo below of the stairs. 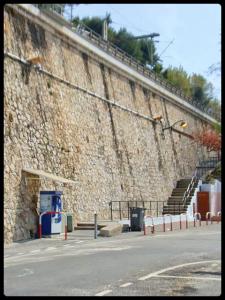 2. At the top of the stairs, follow the road straight ahead and the Villa is approximately 100 metres on the right. The address is 10 Avenue Louise Bordes.

In the past, you could look through the front entrance gates for a glimpse of the landscaped property and peek of the villa, but as at April 2014 when I visited the front gates have been blocked with black covering and it now looks like this (see below): 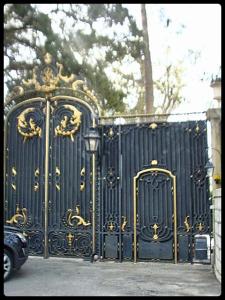 3. On the coastal side, right at the very end of Promenade des Marinières, there is a small rocky beach and it has a private staircase up to a neighbouring villa (this beach is as far as you can get towards Villa Nellcôte and this set of stairs does not lead to Villa Nellcôte).  Editors note January 2015:  We would like to credit a correction for these directions to the owners of the neighbouring villa and apologise for any misinformation from the original post.

There is a padlocked gate at the bottom of these stairs so access to the public is definitely forbidden. Photos below of the beachfront stairs on the right, and aerial view of the property. 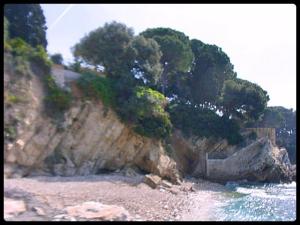 There are local whispers that the current owners of Villa Nellcôte aren’t fond of music fans who visit their wrought-iron front gates for a photo of a site linked to rock history, such as Jim Morrison’s gravesite at the Père Lachaise Cemetery in Paris, or the Abbey Road pedestrian crossing in London immortalised by the Beatles.

However, the day I visited I didn’t see any security personnel shooing away tourists.

If you are a Rolling Stones fan, you have probably already seen the fine set of photographs by Dominique Tarlé documenting the Rolling Stones time at Villa Nellcôte, and Stephen Kijak’s 2010 documentary ‘Stones in Exile’ that shows their journey in making the album.

What really happened at Villa Nellcôte

The mysteries of what really happened behind the gates of Villa Nellcôte when the Rolling Stones stayed there, remain that.

Many of the visitors during the album sessions disagree on details, such as underground tunnels that exist and the confirmation that gold swastikas were painted on the heating vents by the Gestapo.

The closest us mere mortals can do is return to Villefranche and sit at a terrace restaurant at place Amélie Pollonais and re-enact an al fresco lunch setting enjoyed by Keith Richards and Anita Pallenberg. 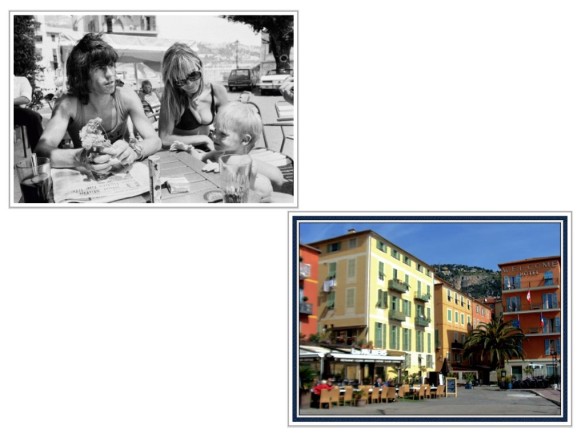