Over a century ago, the Côte d’Azur was a destination for those who wintered here for health reasons and old money who holidayed here, drinking red wine and wondering how to magically transport the sky, sea and sunshine back to their own part of the world.

Faced with grey skies and snowfall that encourages marathon Monopoly sessions by the fireplace, many tourists could easily just skip going on a winter getaway, right?  Here’s 7 reasons NOT to visit the Côte d’Azur in winter:

1. Having to decide between the beach or ski resorts

Do you prefer beaches or the mountains?  Well, don’t visit the French Riviera in winter if you need an easy choice because you can do both in one day, if you like.

That’s right, you can be on the slopes in the Alps in the morning and enjoying a late afternoon snack at a coastal cafeteria on the same day.   Sound impossible?  Well, it’s not.  And while swimming in the sea may be out of the question for most and only the brave dip into the Mediterranean during winter, we are very lucky to have the chance to do this! 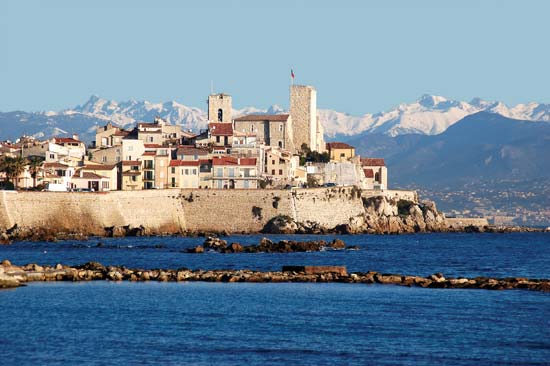 The French Riviera in winter : it’s possible to enjoy the sea and mountains in one day

The geographical location of the French Riviera stretches from the Mediterranean coast to hinterland communities and Mercantour region that includes alpine towns.   The Alpes Maritimes region has easy access to established ski resorts, and you’ll find no shortage of pistes to ski or snowboard including Isola 2000, Auron, Valberg, La Colmiane and Val d’Allos La Foux.  Gréolières is the closest to the coast and while it doesn’t have the amenities of the other resorts it’s perfectly fun for a day out with the family.

Even if you don’t ski there are many exciting things to do at the mountain resorts such as toboganning, DJ concerts on the pistes or simply visit one of the restaurants for a lovely meal overlooking the mountains.

Of course, if winter isn’t your thing then the mountain resorts can also be visited in warmer months when the wildflowers are in bloom, walking trails are beautiful and other attractions and activities are open such as the zip line at La Colmiane, the luge at Valberg, Vesubia Mountain Park with climbing wall, swimming pool and canyoning, Parc Alpha Wolf Park and the natural pool at Roquebillière.

2. Too many winter options for families

If you prefer to have a relaxing winter with your family, the French Riviera isn’t for you.  How could you possibly decide what to do when there are ski resorts, Christmas markets, ice skating, food festivals and traditional celebrations such as the santon fairs or local events including the Lucéram nativity / crèche displays?

Not to mention, the weather is usually mild throughout winter so you can still play outdoors at any of the numerous French Riviera playgrounds.

It rarely rains for days on end throughout winter on the French Riviera so people simply dress up warmer for their regular promenades through town.

However, it seems the change in weather causes a mass exodus from popular walking routes and hiking trails.   If you prefer busier walking paths (excluding the Promenade des Anglais in Nice and Croisette in Cannes which generally have foot traffic all year), go on holiday elsewhere as you’ll likely have little or no company on many walking trails here during colder months.

I do sometimes hear from visitors that the restaurants here are tourist traps churning out average food in high season.  So, if you’re a ‘meat-and-three-vegies’ kind of traveller then don’t come back in winter!

The cooler months kick start some absolutely lip-smackingly good food fairs, the popular truffle season, oyster sales, chestnut festivals, grape harvesting and more.  Also, one of my favourite festive season pastimes is a glass of vin chaud and a slice of pain d’épices at the Marché de Noëls 🙂

Marrons chauds (hot chestnuts) are found at many winter festivals

5. No long queues at tourist attractions

Many of the Côte d’Azur’s tourist attractions close over winter or have reduced hours, but there are still plenty of attractions that are open and you won’t have to brave long queues of tourists to enjoy them.

Drop by one of the French Riviera’s popular museums, visit the gorgeously ornate Villa Ephrussi de Rothschild or take a French Riviera art trail soaking up the sites and landscapes painted by famous artists.

Villa Ephrussi de Rothschild is a year-round attraction worth visiting

I love the buzz of big cities, but it can be overwhelming to be constantly bombarded with urban noise from traffic, construction and city life!

If you prefer a more sedate experience, you can’t miss visiting some of the towns on the French Riviera during autumn and winter when time moves at a much slower pace.

I also find taking photographs is great during colder months because you don’t have other people crowding the background of your panorama, you can get some fantastic photos of daily life without residents feeling they are on show (that perhaps they may feel in high season) and people are generally going about their day at a more relaxed pace.

Some people love over-the-top Christmas decorations, but you’ll find the Côte d’Azur eases back on the tacky factor and decorations are mostly classy.

Casino Square always has an amazing festive display every year

While Christmas on the coast may be short on snow, you’ll find no shortage of festive imagination.  Expect to see garlands of festive lights, giant Christmas trees and lots of Christmas markets – without the repetitive song of ‘Frosty the Snowman’ 20 hours a day, every shop window crammed with yuletide merchandise from early November and every house decorated excessively with neon lights blinking to synchronised music.

Also, most shops tend to stick to civilised opening hours – you won’t see mass frenzies of late-night shopping at most stores right up to Christmas Eve putting pressure on consumers to grab a late Christmas bargain.

Luxury hotels have elegant displays for Noël, Casino Square in Monaco looks suitably grand during the festive season and who won’t think a torchlight descent down the mountain with fireworks over the snow isn’t a fantastic way to see in the New Year?

Some people prefer grey skies, heavy snow and freezing temperatures in winter, however while the French Riviera may not be an obvious choice for a winter getaway it is a perfectly viable destination to visit with tolerable weather, lots of activities and less crowds.