Today, something distracted me from work.   Replying to many emails, I received a notification about a Mens Doubles pair who have recently won at Roland Garros.

For those who aren’t familiar, Roland Garros (French Open) is a major tennis tournament held over two weeks between late May and early June at the Stade Roland Garros in Paris.

The two tennis players, Stéphane Houdet and Nico Peifer, are top wheelchair tennis players but have been mostly unrecognised in French media for this significant win. 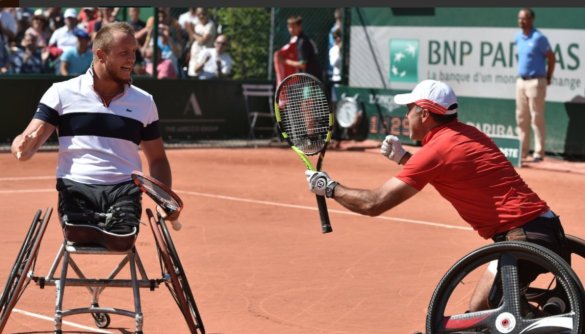 Why is there a lack of French media coverage?

Why does French media avoid coverage?  The words ‘disabled’ and ‘handisport’ are not seen as sexy, they’re not conducive to glamorous advertising campaigns and French media have admitted that they think the public is not interested.  So, they simply don’t talk about it.

The general disregard to people with special needs filters through from school level, lack of pedagogical teaching for special education and lack of support systems for both children with special needs and their families.  As a cultural platform, France has never been a trail-blazer with accessibility information and seriously lacking with media coverage for athletes and professional sportspeople who are not able-bodied.

France isn’t a newcomer to accessible sports – they participated in the inaugural Paralympic Games in Rome back in 1960 and have taken part in every edition of the Summer and Winter Paralympics since then, including hosting the Winter Paralympics in 1992.

Yet, French Paralympians had to wait until the year 2016 – when for the first time in over half a century – France Télévision agreed to show 100 hours of highlights from the Rio Paralympics in a one-hour daily update.  This was only instigated after a petition from the French public and criticism of the poor national media coverage from London’s 2012 Paralympics. 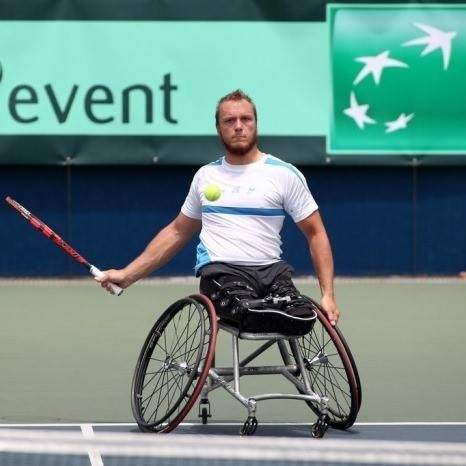 Sadly for Stéphane Houdet and Nico Peifer, France Télévision did not broadcast any of their tennis matches, but only a sequence of about fifty seconds.

Raising the profile of sportspeople with less mobility

The truth is that here in France, sportspeople with restricted mobility have a real and continuing battle for recognition.

They fight stereotypes for funding, for media coverage and in some instances, public acceptance that they are good enough.

It frustrates me and saddens me, but the least I can do is push the message out there that as high-level professional athletes they are worthy and deserve to be on the global stage.  I’m happy to use my network to share their achievement and send a message to French media that I am just one of those millions of people who IS interested.

As well as winning Roland Garros recently, both players have won medals at previous Paralympics.  Stéphane has won at Roland Garros before – he is also the current Masters doubles champion, a former world number one, and has won Wheelchair Mens Doubles at Wimbledon, the Australian Open and US Open.

A fight for change

The more that the public shares the achievements and efforts of handisport teams, the more media coverage they will receive. This in turn will appeal to Sponsors and corporate investors who will always be looking at the bottom line for advertising.   As well as visibility in sport, these athletes have powerful life stories and can advocate and give feedback for accessible innovations in business, tourism, education and technology.

For Stéphane and Nico, there have been small changes for the future – the management by French Handisport Federation and French Tennis Federation has allowed them to upgrade hotel categories and have a physio join them touring.   This may seem unfair when the budgets for football transfers are excessively ludicrous or rugby games rack up prime time coverage as soon as a player dons the national jersey.

To see (in French) their interview after their win at Roland Garros, you can watch it below:

And if more people share their victory it may avoid journalists reporting that the last French Mens Doubles who won at Roland Garros were Edouard Roger-Vasselin and Julien Benneteau in 2014 (deserving as they also were).

Thank you to Stéphane Giraud for sharing their story – in just one week, more than 180K people are enlightened to Stéphane and Nico’s achievement at Roland Garros and that they benefit from the recognition they deserve.

What are your views on media coverage for handisports?  Do you think there should be more coverage in print, online and radio?  I’d love to hear feedback.