The Festival International du Cirque de Monte-Carlo is a yearly circus festival hosted under the Chapiteau (big top) at Espace Fontvieille in Monaco.

The Festival International du Cirque de Monte-Carlo is a traditional type of circus with acrobatic troupes, aerial artists, jugglers and clowns.   Also, it’s important to note that there are animal acts.

Last year there were over 120 artists from 16 countries so there is a good spread of talent and the standard is very high.   In particular, the acrobatic troupes and balancing artists are always exceptional. 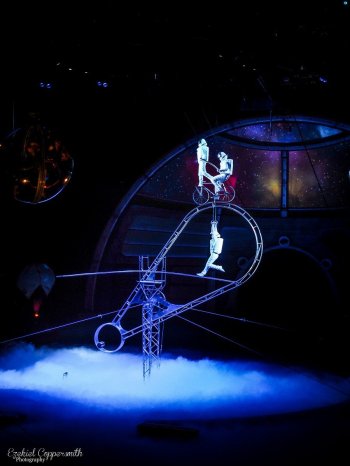 An international jury hands out awards each year under the presidency of H.S.H Princess Stephanie for outstanding acts. The awards (Palmarès) are clown-themed and acts can win a Gold, Bronze or Silver Clown.

For the 2018 Festival, the Festival is celebrating 250 years since the first staging of a circus – believed to be in 1768 by English cavalryman Philip Astley.  The vintage-inspired poster for the 2018 event was designed by artist and ringmaster Alain André as a nod to the history and development of circus acts over the past two and a half centuries.

Tickets for the Circus Festival

Children under 5 years can sit on their parents lap and do not need a ticket.  Kids prices are applicable for ages 5 to 12 years.

Note:  Sunday 21 January and Sunday 28 January have shows at 10.30am (2 hour duration) at reduced ticket prices.  The Gala show is on Tuesday 23 January.

All tickets can be purchased online at www.montecarlofestival.mc or at the ticket counters at the Chapiteau which will be open during the Festival from 10am to 1pm and 2pm to 6pm.

By car:  Go via the A8 in the direction of Italy and take ‘Sortie 56’ for Monaco.  A map for parking locations is below:

Car parking for the Circus Festival

By train:  The Gare de Monaco/Monte-Carlo is 15 minutes walk to Espace Fontvieille or take bus lines 4 or 6 to Fontvieille and get off at stop ‘Heliport’.

By helicopter:  The Monaco Heliport is right near the Chapiteau venue.  Flight time is 6 minutes from Nice Cote d’Azur Airport.

Additionally, on 3 and 4 February 2018 the 7th edition of a mini festival will be hosted for young circus performers, magicians, acrobats and clowns who will perform before an international jury to win awards.

Ticket prices are very reasonable and it is a nice family-friendly way for children to experience a circus atmosphere.