Today in France, it is Epiphany, which is celebrated since the fourteenth century by eating a ‘Galette des Rois’ or the ‘Cake of Kings’.

The small tart is divided up into as many parts as dinner guests, plus one extra for the poor.

In south-east France, the Galette is made of a crusty pastry with a frangipane filling (or sometimes apple, chocolate or chestnuts) and a small santon (fève) is hidden inside the dough.

The Galette usually looks like an apple pie, but sometimes it is a ring-shaped tart topped with candied fruit.

The person who ‘finds’ the santon is symbolically crowned king or queen, often today a Galette will include a cardboard crown for this purpose.

The santons hidden today are made of porcelain or plastic – usually depicting religious figures such as baby Jesus or Virgin Mary – but traditionally they were beans.  To keep up with the modern world, bakers are incorporating santons based outside of religious icons – politicians, sports stars, superheroes, cartoon characters. 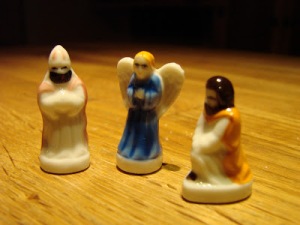 In south-west France, a Galette is usually a bun-shaped crown coated with granulated sugar.

Note: Frangipane is almond cream made of ground almonds, sugar, eggs and butter.